This entry was originally inspired by a documentary on History Channel called "The Earth Without The Moon". However, the History Channel decided to take it down and regrettably it is no longer available on YouTube nor anywhere else. The thesis of this video was that the Earth is extremely lucky to have its Moon, because without it there would be no intelligent life on our blue planet and maybe the planet would not even be blue neither. Perhaps this short video can supplement the missing History Channel documentary:

The reasons why we are here are quite simple: about 10 million years old Earth collided with a planet of the right size with the right velocity and under the right angle creating the Moon and both objects joining their cores. And that wasn't all. The Earth was also of correct size and orbiting at the right distance around the just right type and size of a star.

Then consider another video by Steven Hawking from Genius TV Series on PBS regarding how many stars are out there:

In this episode the "geniuses" needed to pile up quite a few tons of sand to figure out how the approximately 300 billion stars look like. I can provide at least a screenshot of that pile since the episode is not available free of charge: 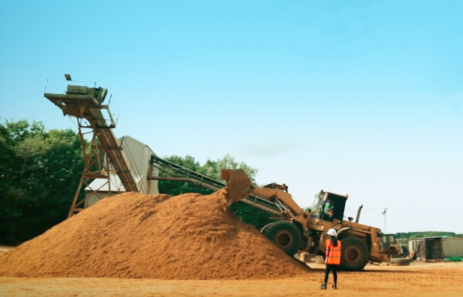 These are the stars only in our Milky Way galaxy. In addition, there are 100 billion galaxies in the Universe, most of them just like our Milky Way. How big of a number is 100 billion times 300 billion? Ridiculously large one cannot possibly imagine. Or, just imagine one billion times of one third of the above pile of sand. Easy, isn't it?

Looking back what I wrote I think of the unthinkable: The Universe is the most likely an awfully lonely place.