It's been hot in June this year of 1988 so far. What an opportunity to have some fun hearing! What about June 23rd? Yes, that's good, the room on Capitol Hill is available and what about the weather? What does the forecast say? Still very hot! Fantastic! And please, let's make sure that the AC is turned down. Considerably down or maybe have it even turned off with the windows opened. Can we do that? No problem!

The above scenario is most likely a fiction. But really? Consider the following video published last year at the 30th anniversary of the now (in)famous Senate hearing:

Conveniently, there is no video of the hearing that kicked off today's global warming madness to provide proof whether or not someone tampered with the AC. Or even turned the AC off and opened the windows. However, the Washington Post article "Setting the record straight ... " offers some clues. No, perhaps the windows were not open. But the room was a bit "stuffy" due to television cameras running according to the article and that's for sure, no speculation here.

Let's leave alone the conflicting statements mentioned in the Washington Post article by Senators Tim Wirth (D-Colo) and John Kerry (D-Mass) and let's focus on the fact that the room was "stuffy" because of TV cameras. In case this hearing was so unique by having TV cameras present, then the argument would hold. Or, similarly, if Washington Post stated that higher room temperatures were common occurrence with the presence of TV cameras, then that would hold too, of course. However, neither fact was mentioned. It is still anyone's good guess what happened with the AC, but mine is that someone indeed tampered with the controls adjusting room temperature in order to help the "good" cause of the global warming.

Now let's fast forward to March of 2017. Now it is no longer the US Government's policy that the Earth's climate is changing due to AWG (Anthropogenic Global Warming) as it was during the previous two terms of Barack Obama. As it sounds ridiculous to declare such a policy, let's listen what the man had to say in 2013:

And now let's compare and contrast with the Congressional Hearing in March 2017 Climate Science: Assumptions, Policy Implications, and the Scientific Method:

Analysis of this hearing certainly deserves a separate article. For now I would point out minute 1:41:00, when the House editor cut out Congressman's Rohrbarcher's attack on Dr. Mann. Perhaps even during Trump's presidency the author of the famous Al Gore's hockey stick graph is a protected species. Or it could be an innocent malfunction of video gadget at a very convenient time. As before, this is anybody's good guess.

What is not only a good guess but a certainty is that Dr. Mann's lying regarding his association with the Climate Accountability Institute. In case his name will be deleted, here is the screen shot: 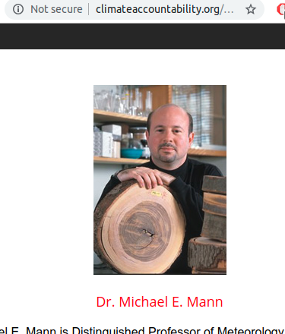 Applying the principle falsus in uno falsum in omnibus Dr. Mann is certainly not to be trusted and therefore neither James Hanson nor anyone associated with the promotion of AWG.

Since lying, deceiving and bullying as the author of hockey stick graph Dr. Mann demonstrated during the Congressional Hearing are certainly not any part of the scientific method, then it means that global warming is a political issue pushing junk science to people's throats.