August, 1946: The citizens of Athens, Tennessee stage an armed revolt against their corrupt local government. People had long been outraged by the local Democratic machine, headed by Boss E.H. Crump, which maintained power through graft and electoral fraud, and used the local sheriff's department as a tool of oppression and brutality. The machine also kept tight control over the region's newspapers and its grasp extended to every part of local government: said one veteran returning from WWII, "You couldn't even get hired as a schoolteacher without their okay, or any other job." The sheriff's department routinely rousted returning G.I.s and hit them with trumped up fees and fines to steal as much of their pay as possible. 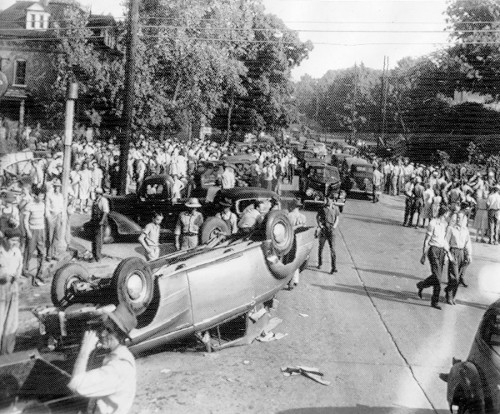 Receiving no help from the federal government - The Department of Justice had investigated election fraud in 1940, 1942, and 1944, but had failed to take any effective action - tensions grew until the August 1946 election, when a group of G.I.s put forward their own slate of candidates in an attempt to overthrow the Crump machine once and for all. They were met on Election day by false arrests, vote fraud, and voter intimidation. Things finally came to a head when an elderly black farmer was turned away from the polls, and subsequently beaten by a policeman with brass knuckles when he and the veteran assigned as a poll watcher objected. The farmer tried to escape, but was shot in the back and killed.

The people had had enough. A group of veterans and other citizens gathered together and, still desperate for a government solution, telegraphed the Governor of Tennessee and the US Attorney General pleading for help. But when no response came, and they learned that the sheriff had sent armed deputies to the polling places, the citizens decided that a show of force was necessary. A small group of men broke into the National Guard Armory and stole 60 rifles and a couple of tommyguns, armed the crowd, and went on the march. By then, word had spread that the sheriff's deputies had seized the ballot boxes and taken them to the local jail. Using the military tactics that they had learned in WWII, the vets quickly developed a battle plan and laid siege to the jail. They knew that they had to take control of the ballots before the Crump machine could arrange for reinforcements, and before they could complete any plans for vote manipulation. Several hundred armed citizens surrounded the jail and traded gunfire with the sheriff and his deputies. The fighting continued through the night, with small arms fire and even dynamite, but by 3:30 AM the deputies were beaten and finally surrendered.

With their surrender, the ballot boxes were recovered; the G.I. candidates had defeated the Crump machine candidates by a 3:1 margin.